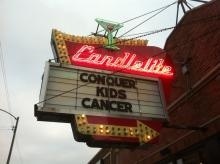 A year ago, my then 29 month old son was diagnosed with a PNET (Primal Neuroectodermal Tumor) in his brain stem, and it extended down, tentacle-like, into his spinal cord. He was given a 40% chance of survival. Very little of the tumor was removed, as it was so embedded within crucial parts of his brain and spine.

It was about this time I found some fellow bloggers who’d participated in a St. Baldrick‘s event to raise awareness and donations toward pediatric brain cancer-and in honor of a lovely sprite of a girl taken too soon by brain cancer, Donna.

Through their writing, I learned of Mary Tyler Mom’s blog, and Donna’s Cancer Story. I didn’t read Donna’s Cancer Story for many months. It was always there, waiting patiently for me to be ready. I was afraid of it, because I knew how it ended, and because it was my story, my son’s story.

I began following Mary Tyler Mom’s blog and Facebook, and I learned of Donna’s Good Things. I found strength through Mary Tyler Mom’s ability to continue on after experiencing such tragedy.

Today is Donna’s Day. It is a day meant for us in the pediatric cancer community to raise our voices and awareness for a much under-researched disease that is the number one killer of children over the age of one.

According to Pediatric Genome Project :
“Cancer is still the leading cause of death from disease among U.S. children over one year of age. Cancer kills more children than cystic fibrosis, muscular dystrophy, AIDS, asthma and juvenile diabetes combined.”

There are St. Baldrick’s events nationwide, and several coming up in my city, New Orleans. Check out the link here.

Show up or stay home, shave or don’t shave, but you can always help by clicking the donate button. Anything helps. Don’t feel like because you may not be able to donate a lot you shouldn’t. A little adds up to a lot.

My son, Robot Boy, is recovering. We are in a place Mary Tyler Mom has titled Scarred Acres:

“Scarred Acres, full of children finished with their treatment, but marked in a hundred different ways by their cancer. Some will live in Scarred Acres the rest of their lives.”

We are working hard, RB is working hardest of all, to rehabilitate and hopefully-one day-in the far or near future, we might move from Scarred Acres.

Reading Donna’s Cancer Story has taught me the importance of choosing hope. We are making future plans. They may be castles in the sky, but one day my strong superhero Robot Boy might turn them into bricks and mortar.

I’d like to leave you with this link to a sad yet heart-lightening video of Donna’s joyful moments.

It was cold. Colder than usual for a fall night. Carl looked upward. The stars were like far away diamond specks against the sky’s sapphire backdrop. The first quarter moon was bright and cast a smoky glare. Carl thought it looked like rain.
It’d been six months since Carl last walked the trail through the woods to the old house, his grandparents’ house. There was no reason to since grandma’s funeral. But his mother had asked him and his brothers to remove the old spinet. Once his great-great-great-grandmother’s, the instrument had literally been in the family for centuries. His brothers were supposed to be meeting him there with the truck. Carl thought they should have gone earlier in the day, but Geof didn’t get out of work until after five. And Brian couldn’t make it until eight for some reason. He didn’t have an explanation, like usual. We always do things on their schedules, thought Carl.
Carl’s foot came down on something long and narrow. It was hard, harder than a small fallen branch or brush. The thing rolled as Carl’s shoe made contact with it, and Carl’s foot slid before him for about a foot before he caught himself on an extended tree limb. He knelt down to examine this long, narrow, and hard thing.
It was difficult to see at first because Carl’s eyes hadn’t adjusted to the level of light under the canopy of trees. He held the thing, holding it in both hands, his palms open. He lifted it with care, like an infant at a baptism.
Carl squinted to see in the dimly lit woods. He brought the thing closer to his face, and when he realized what he held, he threw it down and wiped his palms against his clothes-as if he would cleanse them that way. His breath was heavy; he placed a hand on his chest. He stared at the thing. Carl turned around, looking in all directions, as if he would find an explanation as to why such a thing was laying on the path.
He contemplated turning back, but he decided it was best to walk to the house. Geof and Brian would be there. He would tell them. Maybe they would call the police.
Carl swallowed hard, but his mouth and throat were dry. He could feel his pulse in his head and in his throat.
Suddenly, Carl was aware of the sounds of the woods. Sticks cracked under the foot of some unseen animal. The bushes’ leaves thrashed and whipped, the victims of some unknown commotion. A cat shrieked.
Carl broke into a run, nearly tripping down the path as his feet attempted to outrun his body. Neither Geof nor Brian were there when he arrived at his grandparents’ dark and abandoned house. He wanted to go inside, but he didn’t have a key. He wished he’d brought the thing with him. He didn’t remember where it was. He was so frightened by his discovery that he couldn’t remember where on the path the thing was located.
Ten minutes passed as Carl stood with his back against the house. With his leg crooked, he tapped his shoe against the wooden slats. They were neglected and needed painting. Carl’s mother had sent him and his brothers to paint the house, but their grandmother refused to allow it saying she’d rather spend the afternoon with her boys. She took them all in from the heat and made them lunch and dessert. Five days later, she suffered the stroke. Carl thought of his grandmother and wished she were there now, to take him inside.
After fifteen more minutes, the headlights of Brian’s Chevy appeared on the long driveway. Carl stood in front of the house waiting for his brothers, squinting against the light. Geof exited the truck first, then Brian’s door swung open. He groaned, and he stepped out.
“Let’s get this done,” he said as he pulled up the waist of his jeans. “What’s wrong with you?” Brian asked when he saw Carl’s anxious expression.
Carl explained to his brothers about his discovery. He told them how he’d fled and didn’t exactly remember where to find it. His hands were shaking, and he crossed his arms and stuffed his hands into his armpits.
“It’s probably from some animal,” scoffed Geof.
“I’m telling you, it isn’t,” insisted Carl. “I’m in my third year of biology. I know the difference.”
Geof and Brian looked at one another then back at Carl. They decided to call the police.
“If it’s some kind of dog or something, I’m going to kick your ass, Carl,” swore Brian as Geof made the call.
“It’s not,” Carl said. “I swear to you; it’s not.”

The men moved their family’s spinet into the truck while they waited for the police to arrive. Carl thought he would feel more comfortable inside the house, but he didn’t. The electricity had been turned off, but everything else was the same. The furniture was all there, the television. All of the doors in the house were open. It was as if his grandparents simply vanished leaving everything in place. Carl thought it was creepy.
The police arrived just as Geof was locking-up. Carl explained to them about his find, and that he wasn’t sure where on the trail he’d found the thing. Another police car manned by two officers pulled into the long driveway. The seven men started on the path, walking away from the house. The officers held flashlights, and their beams joined to create one uniform glow over the path. They were almost to the end when Carl stopped them.
“It wasn’t this close to the street,” Carl explained.
“We walked the whole path, Carl,” sighed Geof.
“I know but . . .” Carl was interrupted by the sound of brush crackling and more chaos in the tall grass between the trees. The officers shone their lights in the direction of the noise. It stopped, and they walked into the woods to investigate. Brian and Geof followed, and finally so did Carl.
Carl stood several feet behind his brothers and the officers, not wanting to be left alone but not wanting to head into the danger. The officers moved the leaves of the bushes around while Geof and Brian watched. It seemed they were satisfied they hadn’t found anything significant, and all seven men turned back to the path.
“Good job, jackwad,” sneered Brian as he passed Carl and gave him a hard push.
“It was there. It was somewhere,” said Carl. It really was, he thought. Wasn’t it?
The others walked back toward the house while Carl followed, staring at the dirt the whole time. He hoped to see his thing. He didn’t imagine it.
Brian and Geof were far ahead of Carl, talking to the officers and offering apologies for their brother. Carl heard something to his left, like shoes shuffling in the dirt. Before he could turn to look, four hands were on him, forcing him into the brush. Someone pressed a long, narrow, hard thing against his throat.
“Seems you found something don’t belong to you,” a man breathed into Carl’s ear. Carl could smell his rancid breath. He tried to scream, but the thing was pressed hard against his throat. Someone else took hold of him, and then he was off his feet.
Carl struggled and writhed, but the men were too strong for him. He was losing oxygen and losing strength. When they reached their destination, the man holding Carl’s legs let go of them so that his feet struck the ground hard.The first man with the rancid breath was still holding the thing against Carl’s throat. Carl looked up at the man through his half-opened eyelids. The man realized this and spat in Carl’s face. Carl tried to turn his head, but the thing was pressed too tight against him.
The second man had Carl’s legs again, and the first man abandoned the thing he used to crush Carl’s trachea. He took Carl by the shoulders, and both men heaved him into a sort of pit. Carl was dizzy, but having his oxygen renewed, he scrambled to his feet. He looked at the high earthen walls surrounding him. Helpless, he looked up at the men. They grinned at him and turned away for a moment. Carl clawed at the dirt, but it was useless. The more he tried to climb out, the more the soft clay came apart in his hands and crumbled to the floor of the pit. With his back pressed against the cool, damp earth, Carl peered at a form crouched in the corner. His heart rate increased, and his breathing was again heavy. He swallowed, but his mouth was full of dirt. Carl knelt down beside the figure in the corner. Mud struck Carl’s head as the men shoveled dirt on top of him. Carl’s hand shook as he reached out to touch the figure. It tumbled to its side when Carl’s trembling hand felt it. He could then see it was a female skeleton, its left femur missing. Carl knew. He was in his third year of biology.