Shark Week has ended, and I must admit I am having withdrawals. It happens every year. See, I really like sharks. Like, a lot.

I’ve even acquired the moniker “Nell Shark”, given to me by my dad when I was a teen. I wasn’t only given the nickname because of my love of the carnivorous fish, but also because there was a time when I could consume anything I wanted, like a shark, and my dad would joke that I’d probably swallowed a license plate somewhere. This name was also born from a nickname given to my dad in the time of Saturday Night Live’s Land Shark sketches. He’s often called Lan, and so he became Lan Shark. Being his offspring, I suppose it was only natural that I also share the shark title. Over the years I’ve taken on more of an image of a whale-shark, but I digress.

If reincarnation exists, I want to be a shark. I think it would be wonderful to swim freely in the ocean, at the top of the food chain, not a worry in the world. Except for, you know, commercial fishing nets, shark nets designed to protect beaches, fishermen killing you for your fins, and crazed people hunting you because they think you’re going to chomp innocent surfers and swimmers for fun. Besides all that, I think it would be real nice. I’d even make extra sure not to accidentally taste anyone, which as we all know, could result in maiming or killing them.

Speaking of hunting sharks and sharks accidentally tasting people, one of my favorite movies is Jaws. I love the movie, although I don’t love what it did for sharks. I must make an admission here, as well: I’ve never read the novel.

I know. I’m sorry for my literary sin of loving a movie for so long without reading the story which inspired it. Truly repentant. My penance will be to read War and Peace twice and recite The Illiad fourteen times. I’ve never read War and Peace, either, but I imagine reading it twice would be quite the compensation for any wrongdoing.

But now, now I can claim absolution! For I have received my copy of Jaws, the novel, written by one Peter Benchley (I understand Mr. Benchley and his wife became advocates for shark conservation after seeing the anti-shark furor created by his novel and from Steven Spielberg’s movie which came out a year later) .

And I didn’t just buy the novel, I bought a vintage (sure, why not?) hardcover copy. It’s used, not in mint condition, but in good condition. The jacket is a little torn, but the book itself is in tact. It was cheap, and it smells delicious. Ecstasy! Is anyone not excited by the smell of an old book? It’s just me, then? All right. 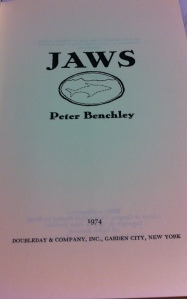 I was pleased and surprised when the book arrived. When I ordered it, I was under the assumption that I was ordering a used copy of a print reissued in 2005. But no! It’s the real thing, baby. Not some reissued young whippersnapper copy. I’m very happy.

To a lot of people this is a silly thing about which to become excited. Oh well. Not to Nell Sharks*.

*My son, Robot Boy, is also a big shark fan. Even at his young age, he watches Shark Week programming, and chomps like a shark on the chewy tubes given to him by his speech therapist. Once, before he was sick, Jaws came on television. Fearing he would be afraid, I stood in front of the television as Jaws attacked some folks on a banana boat while blood filled the water. RB saw Jaws’s attack anyway, and instead of crying or getting scared, he started shouting “Rawr! Rawr!” pretending to be Jaws. His nickname is Chompy Shark.