Decent work is scarce in today’s world. When upgrading from a not so great job to a better one, there are things that will not make a favorable impression on your new boss(es). 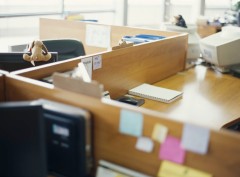 Broadcast your upcoming employment at your current job, to the person who will be your next boss.  This is not helping your image.  If you work in retail, food service, or any job in which you meet the public, there is a level of professionalism that should be maintained. I’ve always thought so, anyway (and yes I’ve worked in both fields). So if you are still working at your current job but have been accepted by a new employer, it’s probably best to refrain from announcing to all present that you will be leaving your current place of employment for greener pastures. Especially not in the presence of the person who will be your next boss. Just like the slogan says, first impressions do indeed last a lifetime.

Put your feet up and don’t pay attention. Supervisors, managers, office managers, and trainers don’t like to waste precious oxygen talking to someone who isn’t paying attention. While in training, it is in a new employee’s best interest to exhibit some sort of interest in the procedures and protocol of his or her new job. Sit up straight and pay attention, or at least pretend to.

Kick off your shoes. This isn’t the Beverly Hillbillies. Please remain fully clothed, including your shoes, at all times when walking around the office. At your cubicle is one thing, but in the head manager’s office is quite another. I don’t know where this trend started, but I’ve observed it in more than one of my coworkers, current and past, and also while I was still in college. Also going to class in pajamas. Never got that one either.

Be the loudest and most obnoxious person in the room. This one is annoying to not only your boss but to everyone around you. Your new coworkers want a chance to get to know you. Cut back on the energy drinks and take a breath.

Pull rank. Your dad/mom/uncle/aunt/grandfather/grandmother is your boss’ boss’ best friend. That’s great and probably how you got your job, but keep it to yourself. It isn’t impressing anyone, and announcing it makes you seem like a jackass. If you pay attention and learn your job and do it well, you won’t even need their recommendations.